Sochi, Russia, April 2, 2017. Alexandra Moiseeva/Ekaterina Syrtseva and Petr Korolev/Anton Ermishenkov emerged victorious at the end of three days of competition at Rosa Khutor Alpine Ski Resort to claim the gold medals from the first edition of the Russian Snow Volleyball Championships. The event reached its climax on Saturday with the semis and medal matches attended by thousands of fans who gathered at the venue set up at an altitude of 1,170 m.

The women’s semis did not account for any sensation. Moiseeva/Syrtseva used their experience to secure a 16-14, 15-7 victory over Alexandra Spineva/Natalia Klimanskaya from Rostov-on-Don. Ekaterina Makroguzova and Elizaveta Terentyeva from Krasnodar rallied to a 15-6, 15-8 win in the second semi-final where they took on Lapteva/Ulianina from Kazan.

“The conditions are quite challenging when playing on snow, especially when it comes to jumping,” Moiseeva and Syrtseva commented. “In general, it is not that easy to play on this kind of surface but a very interesting experience. It feels great that we were able to win gold at our first tournament on the snow. We hope we can achieve further success in future. Many thanks to the fans and to the organisers, the tournament was really cool.”Spineva and Klimanskaya completed the podium after taking the bronze medal match with Lapteva/Ulianina 2-0 (15-10, 15-8). 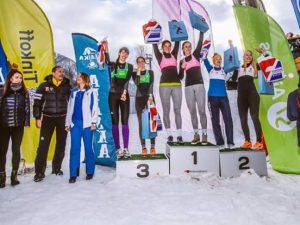 The men’s semis were interesting to watch as they both lasted for three sets. Maxim Zhirkov and Ostap Firsov caused a sensation as they beat top-seeded Yury Bogatov/Ruslan Dayanov 2-1 (12-15, 15-13, 15-13); the result came as a surprise since Bogatov and Dayanov won two international tournaments earlier this winter in Iran and Turkey and they are Russia’s most experienced team on the snow. In the second semi-final, Korolev/Ermishenkov beat Artem Sychev and Andrey Uzhegov 2-1 as well (15-12, 13-15, 15-11). Korolev and Ermishenkov, representing the Volleyball club Reutov from the Moscow Region, went on to claim the title as they won a close final match with Zhirkov/Firsov 16-14, 15-13, to emerge as the first ever Russian Snow Volleyball champions. “I have been playing Volleyball on the snow for five years but never at this level,” Petr Korolev commented. “Never with such a number of fans in attendance, opponents of this calibre and such a professional organisation. It is always a good feeling to win but of course, today we made history, so I am double as happy. It is great that we are now hosting competitions of such a high level. Many thanks to my partner and to all fans who have been cheering us on.” Bogatov and Dayanov regrouped after their setback in the semis to take the bronze medal as they beat Uzhegov/Sychev 2-0 (15-8, 15-5). This is their third medal on the snow this season after they won the tournaments held in Dizin, Iran and Uludag, Turkey. Next week Bogatov and Dayanov will represent Russia at the final stop of the 2017 CEV Snow Volleyball European Tour in Plan de Corones / Kronplatz, Italy together with one women’s pair, Ksenia Khakimzanova and Ekaterina Syrtseva. The eventual medallists of the tournament held in Sochi were awarded by Anna Sidorova, the skip of the Russian women’s curling national team that last week won a historic silver medal at the World Championship in Beijing, China. 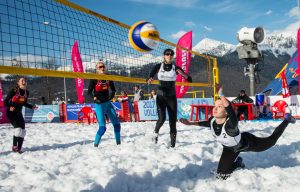 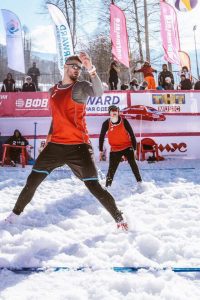 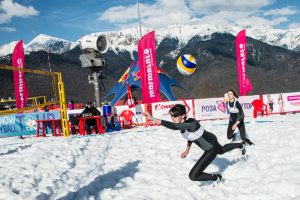